This post is part of Patrick’s “Beer & Gear” series.

Canada may be known for the Mackenzies and their beer drinking prowess but we didn’t fare so well up north in that department.  Six packs of Molsen and Labatt were running about $12, yikes! After a week in Canada without a proper pint I had a bit of the ol’ thirst.  Enter the little town of Bonner’s Ferry, Idaho.  Just after crossing the border we pulled into town and parked alongside the Kootenai River to make some lunch.  Afterwards, we hopped out of the Minnie to take a stroll around town.  Low and behold the first site we saw was a sign reading BEER in big bold letters. 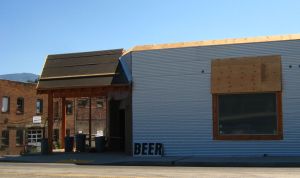 The sign had yet to be hung on the wall of a restaurant still under construction.  A worker strolled by with 2x4s in hand and gave the obligatory small town “hello”.  I jokingly asked “where’s the beer?”  Surprisingly he directed us downstairs to where the brewmaster would pour us some samples. 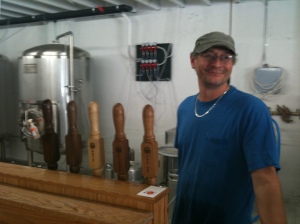 The brewmaster poured us Idaho sized tasters of his Pilsner, Wheat, Pale Ale, IPA, Huckleberry beers.  Though the Pale stood out as my favorite, all of them were quite good especially for a place that hasn’t even opened yet.  I generally don’t like fruit beers but the Huckleberry was quite nice.  It was on the dry side and more essence of fruit rather than juice.  We ended up ordering growler of the Pale for the road. I also traded him my beloved Russian River Growler for one of the first Kootenai growlers in circulation.  The staff there were all excited to see and RRBC vase so far from Santa Rosa. 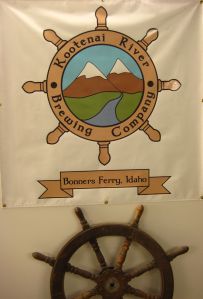