I’d like to type while we’re driving, but it makes me carsick, so I just sit in the passenger seat, watching raindrops dance on the windshield, thinking up sentences that never make it to a page. The radio is tuned to a folk station. Beneath us the grey-black asphalt rumbles as we speed through little towns with little populations. Towns like Dale, Indiana, where I filled my belly with pancakes at Windell’s, which is closing on Sunday after serving families and church groups and Kiwanis Clubs since 1947. The cab of the RV is soothing with the heat on full-blast and the slap of the wipers setting a beat for harmonies between the radio and the hum of the pavement. I’m drowsy. Alongside the road, the Ohio River strains at its banks like a fat belly against a belt.

Maybe I’m a little homesick. Maybe I need a nap or a beer or a cozy new sweater. Maybe it’s just the rain, but I’ve got this bluesy feeling and I’m worrying my Big Stuff Worries, wondering what happens when this trip ends, where we’ll live, what I’ll do, what comes next. I pop these thoughts in my mouth like a cinnamon hard candy to roll around on my tongue. I tuck them into the softness of my cheek where I taste them every time I inhale. Everything I say comes out laced with Big Stuff worries, the scent of cinnamon behind all my words. The river outside pulses and threatens to overflow.

All the state parks belong to us now. In wide river bottoms and beside hardwood-rimmed lakes hundreds of empty campsites line up in neat loops, saving space for the summer crowds, the weekend boaters and the suntanned shouting kids. The bathhouses may be locked and picnic tables turned over against impending snow, but these places are ours alone. We walk slick trails in the company of cardinals and white-tailed deer. Even now, slender roots are pushing down through the earth, small are buds forming beneath a thick layer of fallen leaves. The woods exhale a rush of wind. 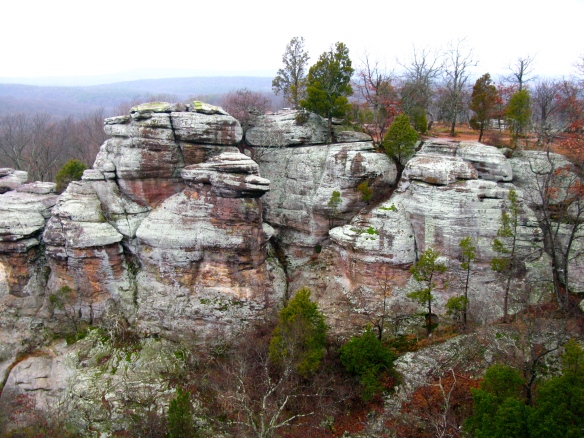 1 thought on “Garden of the Gods, Illinois”