Howling winds, part of Tropical Storm Arlene, whipped down the streets in Santa Elena, a little touristy town perched in the mountains in Costa Rica. Clouds of fog and rain thrashed around like ghosts. “Not a good day to go to the Reserve,” said the man at the cafe where we stopped for coffee. “You won’t see anything.” The cold gusts blew us into the hotel to pout.

We’d planned to visit Monteverde Reserve, a park protecting a swath of cloud forest and home to the Resplendent Quetzal, a flamboyantly plumaged bird which was number one on my “hope to see” list for this trip. Early afternoon the storm seemed to lighten; though it was still blustery we donned our rain gear and hailed a cab. By 2pm we were on a muddy trail plastered with fallen leaves. The forest looked beaten. Broken limbs littered the undergrowth and the wind tossed the trees as if it wanted to bring them all down. Drips and drops were all around us but there were hardly any other noises. We saw few smallish birds, a huge tree fern, a fungus.

Then my eyes focused on a striking green bird – could it be? We watched as the bird flew for a few yards and perched on a mossy, plant-covered branch. I immediately thought, quetzal!, but wasn’t completely sure. We ran into a guide who confirmed it was female quetzal, and told us she’d seen the male farther back on the trail. We retraced our steps and spotted him a few minutes later, his long tail unmistakable. Later we heard this was the first time they’d been seen in three months! We watched until a blast of wind sent the pair flying out of sight deeper in the forest. (Pic is through the binos…not the best photo but proof we saw him.)

On the long, wet walk back to our simple hotel we saw a watercolor-perfect sunset. The day was capped off by a fantastic meal at Trio, a little cafe with the freshest, most imaginative dishes we’ve sampled yet, then a shower that was tolerably warm but ten degrees shy of “hot”. 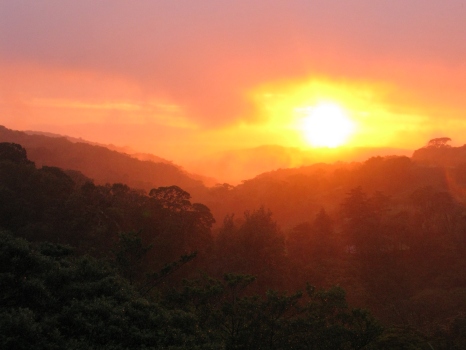 Incredibly satisfied with our day, we crawled into bed, drifting off to sleep with the raucous sounds of the bar next door filtering into our dreams.