All night long the thunder cracked and ricocheted down the rocky walls of the Owyhee River Canyon, rain pelting the roof of the Minnie just a foot above our heads in our sleeping loft. Between flashes of lightning, the full moon peeked out through cloud breaks, washing the sagebrush and willows in pale blue light. It was not a restful night, but thrilling to hear the storm crash over us. We slept late and woke to clear skies and a warm breeze. We bumped over the short sandy track up to the main road, and drove out of the red-walled ravine into farmland.

For the past three days we’ve been mainly out of range of wi-fi or cellphone service, driving through tiny towns and lush national forests, past acres of grassland and rugged rock outcroppings. After a quick overnight early this week in Eagle Point, OR to visit with my parents, Patrick and I headed out through the Rogue River National Forest, and pulled into camp at Paulina Lake, in the Newberry Crater National Monument, at sunset. In the morning, we did a short walk through glassy black obsidian, the result of a volcanic eruption 1500 years ago, and hiked up a small crater to get a view of the lake before going into Bend to tour (and taste!) at the Deschutes Brewery.

Eastern Oregon blew me away. Past Prineville, the Ochco National Forest was still green from an unusually wet spring, and we followed a winding stream through meadows sprinkled with yellow and white flowers. Descending out of the forest brought bare hills tufted with sagebrush. We visited the Painted Hills, where red and ochre bands streaked across clay mounds like giant watercolors, and made camp on BLM land near Bridge Creek. The next morning, after annoying a pair of Western Wood Pewees by trying to snap photos of its nest, we stopped at the John Day National Fossil beds to marvel at the remains of ancient forests and animals. Onward. Towns passed by in seconds, making me wonder, what do people do out here, in places like Brogan, OR where all the side streets seem to be dirt roads, and the biggest building is the one-pump gas station? Even the big cattle ranches seem few and far between. 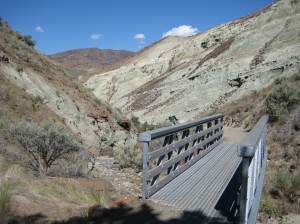 We ended the day with a dip at the Snively Hot Springs, and watched the storm roll in as we ate dinner. Now we’re at a Camping World in Meridian, Idaho, taking advantage of their electrical hookups and internet access before we head into the Boise National Forest.

Dinner in the Owyhee Canyon

2 thoughts on “First Days Out”